Use our interactive map to find your City Council Representative. 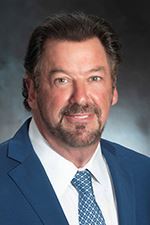 George Fuller was elected Mayor of McKinney in May 2017. He is a builder and developer of custom homes and commercial properties with George C. Fuller Contracting.

Mayor Fuller is the managing construction partner for Adriatica, a 46-acre mixed-use development in McKinney. He developed community infrastructures, retail shopping centers, condominiums, business centers and some of the most award winning and decorated homes in North Texas. Mayor Fuller received the Builder of the Year Award six years in a row from D Magazine along with honors from the National Home Builder Association Awards, including “Best Craftsmanship,” “Best Overall Home,” “Best Floor Plan,” and multiple “People’s Choice” awards.

Mayor Fuller also has several ventures outside of construction including Body Quest, Inc., an international exercise equipment manufacturing and distributing company. He co-created Everide Automotive Parts, Inc., an automotive heating and cooling parts company with national distribution. He also founded Airtech Heating and Cooling, Inc., a Dallas-based commercial and residential general contracting company. Currently, he owns The Guitar Sanctuary, a high-end guitar and music equipment boutique recently named one of the Top 20 Coolest Guitar Shops in the country by Premier Guitar magazine, along with The Sanctuary Music and Event Center and the Sanctuary Performance Academy.

Mayor Fuller serves as President of the Stonebridge Ranch Commercial Association. He and his wife, Maylee, are co-founders of the Love Life Foundation, a non-profit organization dedicated to bringing awareness of the many tragedies inflicted upon children and identifying & supporting agencies & groups that bring relief & comfort to the young victims and their families. He is also a member of the McKinney Chamber of Commerce Board of Directors and a Board Director for Meals on Wheels. He previously served as Chairman of the McKinney Community Development Corporation.

Mayor Fuller studied Business Management and Business Law at Norwich University, the nation’s oldest private military academy. He and his wife live in McKinney and have four children. 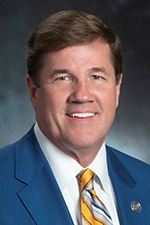 Rainey Rogers was elected as the City Council member representing District 2 in 2015. He served as Mayor Pro Tem in 2017.

Council member Rogers is a Certified Financial Planner (CFP) and the current owner of Rogers-Tate Financial, a wealth management and financial planning firm located in McKinney. He received his CFP from the College of Financial Planning in Denver, Colorado, and has been in the financial services industry since 1984 and with the same brokerage firm for almost 30 years.

Council member Rogers became a resident of McKinney on his 11th birthday, graduating from McKinney High School in 1982. He served in England as a missionary for The Church of Jesus Christ of Latter-Day Saints in 1983 and 1984. He has been active in the community through volunteer service at his church, in city and county government and with the boy scouts serving as a scoutmaster for more than 12 years. Rainey and his four sons are all eagle scouts.

Council member Rogers and his wife, Tammy, are proud parents of five children, two daughters-in-law and two grandsons. Rainey enjoys going on adventure trips all over the world, hunting, boxing (he is a two-time Dallas regional Golden Glove Champion and a three-time Ringside World Champion) and is also a beekeeper.

Native to Los Angeles, California, Shemwell, - like many youth of inner-city origin - faced economic, social, and educational challenges, including crime, violence and a lack of positive opportunities. Growing up in such an environment has led him to have first-hand knowledge of the effects of poverty. By thirteen he was homeless. Despite such challenges, he was able to find and create opportunities for himself. Using his past hardships as motivation, La’Shadion graduated early from Highland High School’s Jr. ROTC with a 3.86 GPA and has since propelled himself into the public service spectrum.

Shemwell moved to north Texas in 2005. Continuing to utilize his life experiences, has led him to gain both respect for the criminal justice system and a passion to organize for reform. He believes this involves breaking the cycle of poverty in struggling communities much like the one he grew up in. In 2016 La’Shadion took his passion to serve further by founding Motivate Inspire Create Inc. (MIC), a non-profit dedicated to mentoring and empowering underprivileged youth.

In 2015 he also served as the President of the Resident Council of the McKinney Housing Authority which began his interest for public service. Shemwell was one of the first on scene during the highly publicized “McKinney Pool Party” where he began to take a more active role in the community and community organizing, speaking at city council meetings, which became the impetus to run for public office and represent his community.

As the youngest member and only person of color on the city council, Mr. Shemwell currently serves the citizens of McKinney as Council liaison to the Parks Board, McKinney Visitors Bureau, and McKinney Housing Authority. He is also an active member of both the McKinney Urban Transit District and McKinney Housing Finance Corporation.

Since his election, Shemwell has fought for lower taxes, implemented a public transit program, and increased the homesteaders’ exemption for seniors and the disabled alike. Shemwell believes equity in policies is the key to improving the lives for all the residents of his community.

Shemwell is also a dedicated father, entrepreneur and continues to his work in community activism. 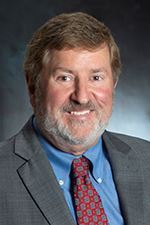 Rick Franklin was elected as the City Council member representing District 4 in 2019.

Council member Franklin is a graduate of Southern Methodist University. A McKinney resident since 1963, Franklin and his wife, Tanya, raised four children in the community.

Council member Franklin is a Commercial Real Estate Broker with over 35 years of experience. Before his election to Council, Franklin served on the following boards: 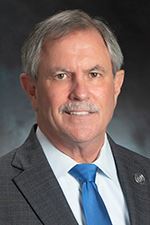 Charlie Philips was elected to City Council in 2017 as an At Large member.

He is invested in the community of McKinney not only in his trial and family law practice but also through his community service. Council Member Phillips moved with his wife to McKinney in 1994, since that time, he has served on several boards and worked extensively with the youth of the community.

Council member Philips is a graduate of the McKinney Chamber of Commerce’s Leadership Program and an active member of the Kiwanis Club. He also teaches Sunday School for children at First United Methodist Church of McKinney.

Council member Philips grew up in Commerce, Texas and graduated from the University of Texas at Arlington and received a Bachelor of Science and Master’s degree in architecture. He graduated from St. Mary’s University in San Antonio, Texas with a law degree in 1992.

Council member Philips and his wife Dina are the proud parents of Emma and Sara. 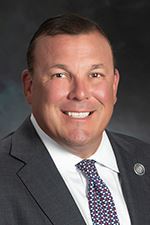 Council member Frazier is actively engaged with local, regional and state politicians through established relationships built while participating in the past four legislative sessions.

Council member Frazier is an alumni of the Leadership McKinney Class of 2012. He is focused on giving back to the community and is a long-time volunteer with Assist The Officer Foundation (ATO) in their day-to-day operations, fundraising, marketing and networking to increase public awareness of the organization. He was instrumental in implementing a confidential counseling program specifically designed to assist officers and their families at no cost to them.

Council member Frazier and his wife Tracie moved their family from Plano to McKinney in 2007. They have three children in McKinney ISD public schools and actively participate in PTA and PTO organizations. He has been an active member and former President of the Valley Creek Dad’s Club for the past eleven years. Council member Frazier enjoys golfing with his family, hunting and watching and coaching his kids' sporting activities.