McKinney has a unique, rich and diverse spirit in part because of the history that shaped it. Over the years, city leadership’s vision in preserving our history has intentionally crafted a town that offers the best of the old with a vibrant present and a very promising future.

McKinney’s history includes many stories about the people who lived here, the work they did and the places they called home. This page offers a short overview of our beginnings. There are many additional resources available through the McKinney Public Library, and our Office of Historic Preservation offers some suggestions. We encourage you to research and learn more about the history that makes McKinney truly unique by nature.

The area we now call Collin County was originally settled by pioneers offered free land by colonizers like William S. Peters and associates. Colonizers were hired by the state of Texas to introduce settlers into this area, which at first was called Peter’s Colony. The offer usually included up to 640 acres of land, a gun and help building a cabin. The Peter’s Colony settlers came in 1841.

Settlers arrived in wagons pulled by oxen or horses and braved the threats of weather, wild animals and native Indians for the promise of free land and a better life. They found that life here in the fertile land was rich but hard. Some left, abandoning their claims, but many stayed on and still more came, establishing farms, communities and commerce. 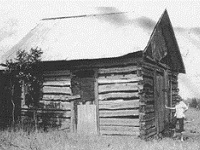 Fannin County originally encompassed most of northeast Texas. In 1846, Collin County and several other counties were created out of the original area, and each was about 30 miles square. The Texas legislature decreed that a county seat had to be within three miles of the center of the county so a rider could get from the edge of the county to the county seat and back home in one day. Collin County was named for Collin McKinney who was a pioneer and land surveyor who helped draft and signed the Texas Declaration of Independence from Mexico in 1836.

The original county seat of Collin County was a town called Buckner, but the legislature’s decision that the county seat needed to be within three miles of the geographic center of the county meant it had to be in a different location. Two locations were put to a vote: what is now McKinney and a location near Sloan’s Grove which is in Fairview today. Heavy rains and swollen creeks prevented Sloan’s Grove voters from reaching the polls on voting day, and McKinney was voted to become the county seat. Although residents believed the new county seat would be named Buckner, the Texas Legislature named the town McKinney for Collin McKinney. The state legislature passed an act establishing McKinney as the county seat for Collin County on March 16, 1848.

The first thing other than a home established in McKinney was a church in the Wilmeth home in April, 1848, and the first non-residential building was the Lovejoy Store that was moved from Buckner to the new town on May 3, 1848, and placed on what would eventually be the northwest corner of the square. On March 24, 1849, 120 acres from the William and Margaret Davis holdings were conveyed for the new town. The town was incorporated in 1849 and re-incorporated in 1859.

The area’s population grew slowly at first. Settlers found that the native grasses would only feed grazing animals well when it was green, and the soil, though fertile, was a quagmire when it rained, so transportation of agricultural goods was nearly impossible. Enter the Houston and Texas Central Railroad in 1872. With reliable transportation, people and goods could move in and out of McKinney, and this development stimulated a time of unprecedented growth in the town. 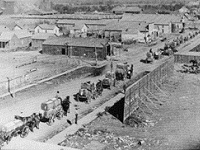 Over the next 50 years, cotton became a major source of revenue in Collin County. In 1860, the yield was 16 bales, and in 1870 it was 4,371 bales. In 1870, there was one cotton gin in McKinney, but by 1876, there were four. A cotton compress began operation in 1892, and was still in operation until the mid-1980s. The first textile mill – The Texas Cotton Mill Company – was opened in McKinney in 1910. It was one of only two mills west of the Mississippi that manufactured color-print cloth. It later became a major manufacturer of denim.

The region also produced large amounts of corn, wheat and oats. The high yields placed Collin County among the top producers in the state. This stimulated the growth of the grain processing industry here. One of the earliest mills was established in 1892 and operated until the 1970s. Another was established in 1894, and in 1906 built new facilities that are still in use today. 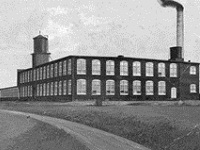 The growing prosperity meant that bigger and better facilities were needed for the county seat. In 1866, the Commissioner’s Court imposed a special courthouse and jail tax, and in 1874 building on the new courthouse began. When it was completed in 1875, it was the tallest building in Texas north of San Antonio.

The booming economy meant better infrastructure and larger homes for many of the leading citizens. Many of McKinney’s most impressive historic homes were built in the 1890s. By 1885, the city had newspapers, banks, flour mills, an opera house, churches and two thousand residents. The first telephone exchange arrived in 1883, a volunteer fire department organized in 1887 and electric lights first lit up the town in 1889. 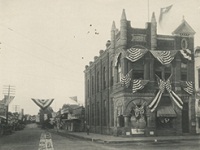 From these seeds grew the McKinney we know today: a town that is growing quickly and was chosen by Money Magazine in 2014 as the #1 Best Place to Live in the country. A diverse and thriving economy, a quality way of life and leadership, and citizens dedicated to celebrating our roots serve us today and are paving the way for continued growth into the future.

This website contains a list of materials used as resources for this page, along with additional historical references. 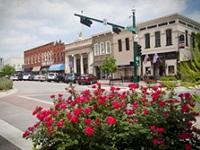