Since the single-station, battery-powered smoke alarm became available to consumers in the 1970s, the home fire death rate has been reduced by one-half. Most states have laws requiring them in residential dwellings. 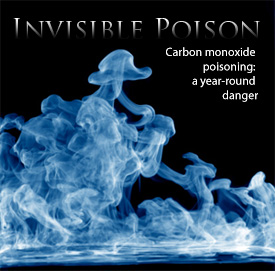 In the bloodstream, CO prevents oxygen from combining with hemoglobin and restricts oxygen delivery to vital organs. CO poisoning can cause a number of symptoms, depending on the length and severity of the exposure.

Possible sources of CO In the home:

The best defenses against CO poisoning:

What to do if your CO Detector goes off

CO detectors are very sensitive and may occasionally give a false indication of a problem. It is important to evaluate the conditions of the occupants when an alarm occurs.