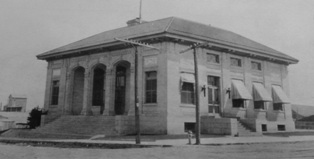 The 1911 McKinney Post Office was designed by architect J. H. Suttle, and is a recorded Texas historic landmark. It is an example of an Italianate style of architecture that was very popular for government buildings during the early part of the 20th century. The post office has the original tile roof and a three-bay arched entrance. Large brackets are located beneath the overhanging eave of the building. The building is clad in limestone and still has the original doors and windows. In 1959 the building was deeded to Collin County by the Federal Government. Today it is home to the Collin County History Museum and Frank Klepper’s painting of the return of General Ben McCullough’s body from the Battle of Pea Ridge.